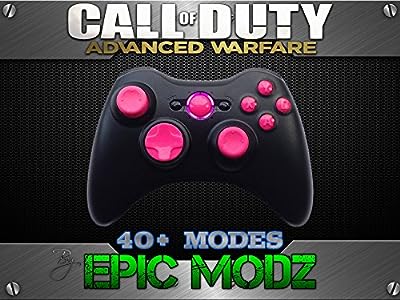 Price: £100.00
As of 2021-01-19 17:20:19 UTC (more info)
Product prices and availability are accurate as of 2021-01-19 17:20:19 UTC and are subject to change. Any price and availability information displayed on http://www.amazon.co.uk/ at the time of purchase will apply to the purchase of this product.
Availability: IN STOCK - View More Details for Customisation Options And Current Price
View More Details And Buy
Product Information (more info)
5 1
CERTAIN CONTENT THAT APPEARS ON THIS SITE COMES FROM AMAZON SERVICES LLC. THIS CONTENT IS PROVIDED 'AS IS' AND IS SUBJECT TO CHANGE OR REMOVAL AT ANY TIME.

The Pink spectrum controller is a really sick modded controller, it starts out as a Official XBOX 360 controller and then it is fitted with a 10 mode rapid fire elite mod, a custom blue LED mic plate is then fitted with some light pink ABXY buttoms, blue thumbsticks and d-pad then finished off with a custom pink LED player lights.